Back in the days, men had to come up with another type of powerful vehicle for heavy duty purposes. They needed a machine that was strong and robust enough to pull tractors and other heavy farm equipment that had gotten stuck in deep mud or snow. Lumberjacks who had to be in the thickness of the woods fared better when they didn’t have to make their trek on foot. Hence, the All-Terrain Vehicle or ATV was conceptualized.

The ATV did just about everything they were designed for, including conquer the trails other vehicles found impossible to pass. It was only later that the ATV caught man’s fancy as a form of sport and recreation. The recent decades saw the rise of ATV racing as a formidable sport which thrilled not only the participants but the spectators as well.

ATV racing is popular indeed but it is also a dangerous activity. Parents rarely allow their kids to participate in this sport because of the dangers. The race is every bit a combination of the excitement of speed and rough, unpredictable terrains. The obstacles vary diversely from rocks to fallen trees to just about anything that nature has to offer as a form of challenge.

Recreational off-road driving trips in an ATV are dangerous enough even at low gears because it entails travelling along paths that could be too thick or too narrow to pass through. Impenetrable areas have unforeseen dangers and this can force you to back track and look for alternative routes. The thrills of ATV racing on the other hand are different because the drivers push the limits of the machine. They would often speed into treacherous terrain without even knowing what to expect. The desire to win the race is more intense than the fear of hidden dangers like deep pits or huge rocks that can damage the ATV.

You might have seen some of these ATV races on television and found them really exhilarating. With all the excitement and the speed going, anyone who is watching it can expect to see some vehicles crashing any time. You can watch in excitement how machines are thrown off or go rolling wildly with all the passengers inside.

This is one of the reasons why safety is a big and important factor in ATV racing. A four-wheeler race requires strict compliance to safety and gear rules for you to qualify as a contestant. Both driver and rider have to don all the required protection from body armour to helmets and neck braces. They can never have too much if safety is the issue. 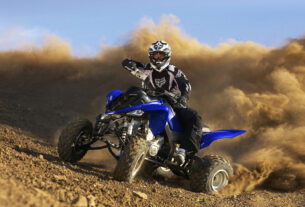 Five Easy Ways to Lengthen the Life of Your UTV’s, Dirtbikes and ATV’s